What is the Difference Between Christian
Education and Public School Education? (1982)

The word "educate" means to bring up, nurture, or train. When referring to Christian education, the word "educate" means: "Ye fathers, provoke not your children to wrath: but bring them up in the nurture and admonition of the LORD" (Ephesians 6:4), as well as, "Train up a child in the way he should go: and when he is old, he will not depart from it" (Proverbs 22:6).

The Public School System has planned education primarily as a benefit to the State, as well as society in general. In an article on Compulsory Education (Encyclopedia Americana, 1954, Volume 9, page 601), the former Superintendent of Public Instruction for the State of Pennsylvania states:

"If the welfare of society and the State depends upon an educated citizenship and if the State possesses the legal authority to tax the property of all its citizens for the accomplishment of this result, then the State must also possess and must exercise the authority to compel the children who are to become its future citizens and upon whom its welfare in the future depends to attend upon the instruction provided for them."

He says that the State must compel the children to attend upon the instruction provided for them.

Education for the Christian purposes to conform the Saint to the image of Christ-- "to be conformed to the image of His Son" (Romans 8:29), Christian education is primarily planned to benefit God, as well as the student. To become more like Christ is the goal of Christian Education.

All education must have a purpose. Christ stated: "He that is not with Me is against Me" (Matthew 12:30). Education that is not purposely for Christ is against Christ. For this reason God has warned His people: "Learn not the way of the heathen" (Jeremiah 10:2).

The Public School System administers education in varying degrees of Traditional and Progressive Education. Traditional Education involves the structured approach of a disciplined learning of factual knowledge. This would include the "Thee R's" (reading, writing, and arithmetic). Progressive Education involves Socialization and Pragmatism. Socialization is "fitting a child to the needs of society" (Walter G. Fremont, Faith for the Family Magazine, September 1981, page 12), while Pragmatism is the idea that truth is constantly changing and there are no absolutes.

Public Education views education as something which the State must regulate and control. Familiar terms come to us from the State's control of education: "mandatory school attendance" (the law that children, generally between the ages of six and eighteen, must attend a Public School or a duly authorized school), "contributing to the delinquency of a minor" (when parents or guardians do not send their children to a Public School or a duly authorized school), "teaching credentials" (State licensing of teachers, authorizing them as qualified teachers), and "minimum standards" (standards, e.g., as set in the State of Ohio, for all duly authorized schools concerning, among many things, the subjects in which instruction is required).

Because God gives parents the responsibility of educating their children for Himself, the parents also have been given the Control of Education. "Fathers, provoke not your children to wrath: but bring them up in the nurture and admonition of the LORD" (Ephesians 6:4). This responsibility is given to the parents-- not to the Church, the Christian School, or the State. The parent may choose to put his child under the tutorship of a Church Related School or an Independent Christian School, but the responsibility and control are still his. Notice the inspired words of the Apostle Paul: "Now I say, That the heir, as long as he is a child, differeth nothing from a servant, though he be lord of all; But is under tutors and governors until the time appointed of the father" (Galatians 4:1-2). "Until the time appointed by the father" gives the responsibility and control of the Christian Education of the children to the parents-- and specifically to the father.

"I am as sure as I am of the fact of Christ's reign that a comprehensive and centralized system of national education, separated from religion, as is now commonly proposed, will prove the most appalling enginery for the propagation of anti-Christian and atheistic unbelief, which this sin-rent world has ever seen... It is capable of exact demonstration that if every party in the State has the right of excluding from the public schools whatever he does not believe to be true, then he that believes the least must give way to him that believes absolutely nothing, no matter how small a minority the atheists or the agnostics may be. It is self-evident that on this scheme, if it is carried out in all parts of the country, the United States' system of national popular education will be the most efficient and wide instrument for the propagation of atheism which the world has ever seen" (A. A. Hodge, "Popular Lectures on Theological Themes," 1889, pages 281-283).

Because "children are an heritage of the LORD" (Psalm 127:3) and because fathers are instructed to bring up that heritage "in the nurture and admonition of the LORD" (Ephesians 6:4), "as for me and my house, we will serve the LORD" (Joshua 24:15) inside a Christian School, outside any school that is not dedicated to conforming my children to the image of Christ.


Figure 2. A Comparison of Three Approaches to Education 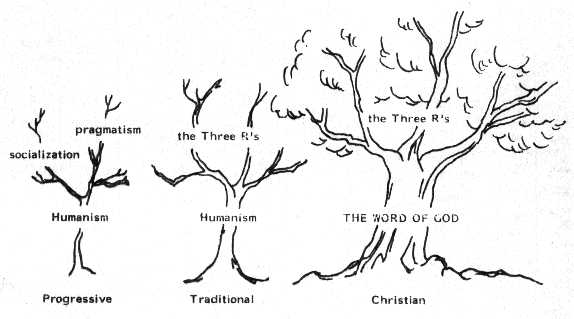