Sir Robert Anderson and the Seventy Weeks of Daniel

The significance of Sir Robert Anderson's book, "The Coming Prince" (1895), should not be underestimated by modern students of Bible prophecy, in that Anderson not only ably defended Daniel's authorship of the Book of Daniel from the "scholarship" of unbelief of the Higher Criticism of his day, but he clearly established the historical accuracy of the fulfillment of the time oriented prophecy for the First Advent of the LORD Jesus Christ. "Know therefore and understand, that from the going forth of the commandment to restore and to build Jerusalem unto the Messiah the Prince shall be seven weeks, and threescore and two weeks: the street shall be built again, and the wall, even in troublous times. And after threescore and two weeks shall Messiah be cut off, but not for Himself" (Daniel 9:24-26).

"The Julian date of that 10th Nisan was Sunday the 6th April, A.D. 32. What then was the length of the period intervening between the issuing of the decree to rebuild Jerusalem and the public advent of 'Messiah the Prince,' -- between the 14th March, B.C. 445, and the 6th April, A.D. 32? THE INTERVAL CONTAINED EXACTLY AND TO THE VERY DAY 173,880 DAYS, OR SEVEN TIMES SIXTY-NINE PROPHETIC YEARS OF 360 DAYS, the first sixty-nine weeks of Gabriel's prophecy."

The very fact that Anderson, in retrospect, was able to demonstrate with mathematical accuracy the fulfillment of Daniel's prophecy for the First Advent of the LORD Jesus Christ, indicates that the Father is completely pleased and willing that His Saints and Angels be occupied with labor, study, and anticipation for the Second Advent of His Dear Son. "Unto whom it was revealed, that not unto themselves, but unto us they did minister the things, which are now reported unto you by them that have preached the Gospel unto you with the Holy Ghost sent down from Heaven; which things the angels desire to look into" (1Peter 1:12). 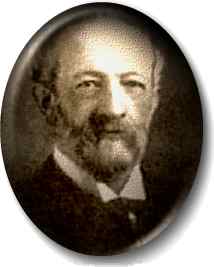 Born into the Christian home of Irish Presbyterians of Dublin, Ireland in 1841, Robert Anderson did not come into "full assurance of faith" (Hebrews 10:22) until he was nineteen years old, during the Irish Revival (1859-1860). One Sunday, after listening to Dr. John Hall preach, he remained behind to argue with the minister. Dr. Hall solemnly appealed to Robert, "I tell you as a minister of Christ, and in His name that there is life for you here and now, if you will accept Him. Will you accept Christ or will you reject Him?" To this, Robert Anderson paused, but finally exclaimed, "In God's name I will accept Christ!" "And," he said, "I turned turned homeward with the peace of God filling my heart." "And the peace of God, which passeth all understanding, shall keep your hearts and minds through Christ Jesus" (Philippians 4:7). Though he was enrolled at Trinity College (Dublin)-- from which he graduated in 1862-- he became active as a lay-preacher, bringing many to Christ. "He that goeth forth and weepeth, bearing Precious Seed, shall doubtless come again with rejoicing, bringing his sheaves with him" (Psalm 126:6).

Becoming a member of the Irish Bar in 1863, Anderson was introduced to police work, when he prepared legal briefs and interrogated prisoners that had attempted to overthrow British rule in Ireland. "The steps of a good man are ordered by the LORD: and He delighteth in his way" (Psalm 37:23). Moving to London in 1877, Robert Anderson joined the staff of the Home Office, developing his investigative skills through the detective department. Promoted to Assistant Commissioner of Metropolitan Police and Chief of the Criminal Investigation Department of Scotland Yard in 1888, the records indicate that crime decreased in London during that period-- when Jack the Ripper infamously terrorized London and Sir Arthur Conan Doyle's Sherlock Holmes pursued his nemesis, Moriarty. "6 For promotion cometh neither from the east, nor from the west, nor from the south. 7 But God is the Judge: He putteth down one, and setteth up another" (Psalm 75:6-7).

Serving with Scotland Yard until his retirement in 1896, he was knighted by Queen Victoria. His many friends included Handley G. Moule, Henry Drummond, James M. Gray, and C. I. Scofield. "I am a companion of all them that fear Thee, and of them that keep Thy precepts" (Psalm 119:63). It was Horatius Bonar who first taught Anderson the precious truths concerning the Second Coming of the LORD Jesus Christ. "So Christ was once offered to bear the sins of many; and unto them that look for Him shall He appear the second time without sin unto Salvation" (Hebrews 9:28). As a Christian writer, he authored seventeen major books, among them his "Human Destiny" was accounted by C. H. Spurgeon as the "most valuable contribution on the subject" that he had ever seen. Sir Robert Anderson remained active and useful to his LORD until his death in 1918. "I have fought a good fight, I have finished my course, I have kept the faith" (2Timothy 4:7).

Anderson's "Coming Prince" was written many years before the Balfour Declaration (1917) made plain Britain's guarantee of a Jewish national home in Palestine; thus, establishing the modern framework for Israel to not only be re-birthed as a modern nation (1948), but a nation which will have a Temple to be prophetically desecrated by the "prince that shall come" (the Antichrist), who "shall confirm the covenant with many for one week: and in the midst of the week he shall cause the sacrifice and the oblation to cease, and for the overspreading of abominations he shall make it desolate" (Daniel 9:26-27). Even though the subject matter and title of the book dealt mainly with the Antichrist, it was the Second Advent of Messiah the Prince (Daniel 9:25) for Whom Sir Robert Anderson longed and anticipated. "10 That at the Name of Jesus every knee should bow, of things in Heaven, and things in Earth, and things under the Earth; 11 And that every tongue should confess that Jesus Christ is LORD, to the glory of God the Father" (Philippians 2:10-11).

"It was a calamity for the Church of God when the light of prophecy became dimmed in fruitless controversy, and the study of these visions, vouchsafed by God to warn, and guide, and cheer His saints in evil days, was dismissed as utterly unprofitable. They abound in promises which God designed to feed His people's faith and fire their zeal, and a special blessing rests on those who read, and hear, and cherish them. One of the most hopeful features of the present hour is the increasing interest they everywhere excite; and if these pages should avail to deepen or direct the enthusiasm even of a few in the study of a theme which is inexhaustible, the labour they have cost will be abundantly rewarded."

May the reading of Sir Robert Anderson's book, encourage us to keep the words of our LORD's prophecy. "Blessed is he that readeth, and they that hear the words of this prophecy, and keep those things which are written therein: for the time is at hand" (Revelation 1:3).

"If the book of Daniel might be read by itself no question whatever could arise. 'The Coming Prince' is there presented as the head of the revived Roman empire of the future, and a persecutor of the saints."

On the other hand, his "Introduction" (Chapter 1) begins with a defense of the prophetic fact that the LORD Jesus Christ will most certainly return to judge the world. Anderson wrote:

"But the day is coming when 'our God shall come and shall not keep silence' [Psalm 50:3]. This is not a matter of opinion, but of faith. He who questions it has no claim whatever to the name of Christian, for it is as essentially a truth of Christianity as is the record of the life and death of the Son of God. The old Scriptures teem with it, and of all the writers of the New Testament there is not so much as one who does not expressly speak of it. It was the burden of the first prophetic utterance which Holy Writ records; ['And Enoch also, the seventh from Adam, prophesied of these, saying, Behold, the LORD cometh with ten thousands of His Saints' (Jude 1:14)] and the closing book of the sacred Canon, from the first chapter to the last, confirms and amplifies the testimony."

"The Coming Prince" is a classic interpretation of the prophecies of Daniel, especially the ninth chapter. Concerning Daniel's Seventy Weeks, Anderson wrote:

"The only inquiry, therefore, which concerns us relates to the nature of the crisis [i.e., the Judgment of the Earth] and the time of its fulfilment [i.e., the duration of the Tribulation and especially the Second Coming of the LORD Jesus Christ]. And the key to this inquiry is the Prophet Daniel's vision of the seventy weeks."

Next "From the Editor's Desktop"