The Conversion of Martin Luther

"A man's heart deviseth his way: but the LORD directeth his steps"
(Proverbs 16:9). 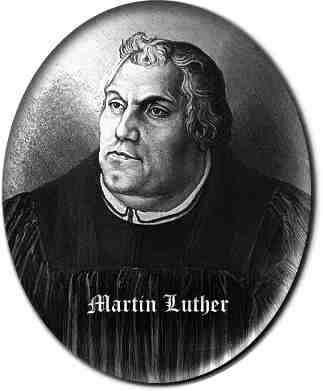 hough Martin Luther (1483-1546) came from the household of a simple working man; his father, John Luther-- a German miner by trade-- saw to it that Martin had the opportunity of education. With great diligence on the part of the young Luther, he eventually attained graduation from Erfurt University as a Doctor of Philosophy (1505). "A man's heart deviseth his way: but the LORD directeth his steps" (Proverbs 16:9). Since Luther had taken the opportunity to avail himself of the University's library, he came into his first contact with the Bible-- an all but inaccessible Book to the common man-- still, It is "able to make thee wise unto salvation through faith which is in Christ Jesus" (2Timothy 3:15). His attraction and fascination for the Scriptures caused him to be convicted of his own sin. "He was returning to Erfurt, and was now near the city gate, when suddenly black clouds gathered overhead, and it began to thunder and lighten in an awful manner. A bolt fell at his feet. Some accounts say that he was thrown down. The Great Judge, he thought, had descended in this cloud, and he lay momentarily expecting death. In his terror he vowed that should God spare him he would devote his life to His service" (James A. Wylie, "The History of Protestantism" ---New Window, Volume 1, Book 5, Chapter 2 ---New Window). "The lot is cast into the lap; but the whole disposing thereof is of the LORD" (Proverbs 16:33).

Martin Luther described his life-- prior to his ordination into the priesthood of the Roman Catholic Church (1507)-- as an Augustinian monk (1505-1507), thus: "If ever [a] monk could obtain heaven by his monkish works, I should certainly have been entitled to it" (Wylie, "THOP", Vol. 1, Book 5, Chapter 3 ---New Window). "Therefore by the deeds of the Law there shall no flesh be justified in His sight: for by the Law is the knowledge of sin" (Romans 3:20). James Wylie described Luther's monkish struggle to find peace with God: "He shrank from the sight of his own vileness... he trembled when he thought of the holiness of God. It was not the sweet promise of mercy, but the fiery threatening of the Law, on which he dwelt. 'Who may abide the day of His Coming, and who shall stand when He appeareth?' [Malachi 3:2]" (Wylie, "THOP", Vol. 1, Book 5, Chapter 4 ---New Window).

John Staupitz, the Vicar-General of the Augustines in Germany, was unique in that he was one who understood God's Simple Plan of Salvation; and providentially, God led him to counsel Luther concerning that "plain path" (Psalm 27:11) of salvation. "'I cannot and dare not come to God,' replied Luther, in effect, 'till I am a better man; I have not yet repented sufficiently.' 'A better man!' would the Vicar-General say in effect; 'Christ came to save not good men, but sinners. ['They that are whole need not a physician; but they that are sick' (Luke 5:31).] Love God, and you will have repented; there is no real repentance that does not begin in the love of God ['We love Him, because He first loved us' (1John 4:19)]; and there is no love to God that does not take its rise in all apprehension of that mercy which offers to sinners freedom from sin through the blood of Christ.' 'Faith in the mercies of God!' ['Not by works of righteousness which we have done, but according to His mercy He saved us, by the washing of regeneration, and renewing of the Holy Ghost' (Titus 3:5).]" (Wylie, "THOP", Vol. 1, Book 5, Chapter 4). Before Staupitz departed from Luther, he gave him the gift of a Bible. Staupitz said, "Let the study of the Scriptures be your favorite occupation" (Wylie, "THOP", Vol. 1, Book 5, Chapter 4). "Man shall not live by bread alone, but by every Word that proceedeth out of the mouth of God" (Matthew 4:4).

Wylie continues the account of how Martin Luther came to salvation in "full assurance of faith" (Hebrews 10:22). "Luther's faith was as yet but as a grain of mustard-seed. After Staupitz had taken leave of him he again turned his eye from the Savior to himself; the clouds of despondency and fear that instant gathered; and his old conflicts, though not with the same violence, were renewed. He fell ill, and in his sore sickness he lay at the gates of death. It pleased God on this bed, and by a very humble instrument, to complete the change which the Vicar-General had commenced. An aged brother-monk who, as Luther afterwards said, was doubtless a true Christian though he wore 'the cowl of damnation,' came to his bedside, and began to recite with much simplicity and earnestness the Apostle's Creed, 'I believe in the forgiveness of sins.' Luther repeated after him in feeble accents, 'I believe in the forgiveness of sins.' 'Nay,' said the monk, 'you are to believe not merely in the forgiveness of David's sins, and of Peter's sins; you must believe in the forgiveness of your own sins.'"

"['12 Giving thanks unto the Father, which hath made us meet to be partakers of the inheritance of the Saints in Light: 13 Who hath delivered us from the power of darkness, and hath translated us into the Kingdom of His Dear Son: 14 In Whom we have redemption through His blood, even the forgiveness of sins' (Colossians 1:12-14).] The decisive Words had been spoken. A ray of Light had penetrated the darkness that encompassed Luther. He saw it all: the whole Gospel in a single phrase, the forgiveness of sins  not the payment, but the forgiveness" (Wylie, "THOP", Vol. 1, Book 4, Chapter 5). "Who is a God like unto Thee, that pardoneth iniquity, and passeth by the transgression of the remnant of His heritage? He retaineth not His anger for ever, because He delighteth in mercy" (Micah 7:18). "In this cell at Erfurt died Martin Luther the monk, and in this cell was born Martin Luther the Christian, and the birth of Luther the Christian was the birth of the Reformation in Germany" (Wylie, "THOP", Vol. 1, Book 4, Chapter 5). The Kingdom of God that flowered from that Reformation in Germany "is like a grain of mustard seed, which a man took, and cast into his garden; and it grew, and waxed a great tree; and the fowls of the air lodged in the branches of it" (Luke 13:19).

(The above was excerpted from a series of articles, "Babylon the Great" ---New Window.)

The Conversion of Abraham Lincoln ---New Window
by Rev. James F. Jacquess
"There is written evidence that Abraham Lincoln became a Christian in 1839 in Springfield, Illinois."

The Conversion of C. H. Spurgeon ---New Window
by Henry Davenport Northrop
Of his conversion Mr. Spurgeon spoke on every fitting opportunity, hoping thereby to benefit others.

St. Patrick's Confession ---New Window
by Patrick (373-465 AD)
"I, Patrick, a sinner, a most simple countryman, the least of all the faithful and most contemptible to many, had for father the deacon Calpurnius, son of the late Potitus, a presbyter, of the settlement of Bannaven Taburniae; he had a small villa nearby where I was taken captive. I was at that time about sixteen years of age. I did not, indeed, know the true God; and I was taken into captivity in Ireland with many thousands of people, according to our deserts, for quite drawn away from God, we did not keep his precepts, nor were we obedient to our presbyters who used to remind us of our salvation. And the Lord brought down on us the fury of his being and scattered us among many nations, even to the ends of the earth, where I, in my smallness, am now to be found among foreigners." --Patrick